This week’s theme is something I am quite familiar with…embarrassing moments.  We’ve all had our share but some of us, me in particular, have had a larger share than most.  I used to think these moments came to me frequently because of bad luck or terrible timing but as I grew older, I realized that some embarrassing moments can actually be blessings in ‘disguise.’  It just so happens that in this story, I was WEARING a disguise—that of Barney, the Purple Dinosaur.

I know what you’re thinking…you HATE Barney.  I couldn’t agree more.  I despised him before I was a mother, during my daughter’s toddler years, and even up until this day. His voice and his songs are like nails on a chalkboard.  When he begins to skip around singing, “I love you and you love me…” I have the strong urge to hurl…hurl something at the television and even hurl my lunch.  So now that we are on the same page about how strongly we all detest Barney, I can explain just how I wound up being him for a period of two weeks! 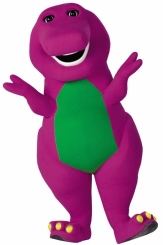 During my freshman year of college in Boston, my father fell on hard times. He had spiraled downward after my mother’s death and soon after, he lost his job and my childhood home.  The university I was attending was an expensive one, and even with scholarship and financial aid, I could not afford to stay there.  I moved back to Long Island before freshman year ended and moved into an apartment with my sister.  My plan was to attend Nassau Community College at night and work during the day to earn enough money to return to my beloved Boston.  I got a job working as an assistant to the Box Office Manager at Nassau Coliseum in Uniondale, which was the perfect location since it was directly across the street from the community college I was attending.

For an eighteen year old girl, it was a dream job.  I loved my coworkers, many of them around my age, and all the perks that went along with the job.  I could see concerts, Islander games, and any other event there for free.  Another huge perk was that I got to meet and even befriend many athletes, musicians, and other interesting people.  There was even opportunity to make extra money. 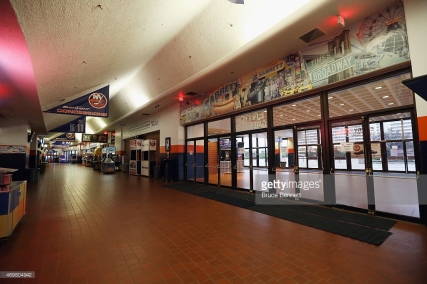 Nassau Coliseum concourse (as it appeared in the early 90’s)

For two weeks each summer, the Coliseum hosted a big outdoor fair with rides, games, and entertainment.  They offered the staff the opportunity to work certain jobs, such as manning the ticket or information booths, but there were only several positions available so you had to act fast.  Unfortunately, I had waited too long to tell the big boss that I was interested in working the fair.

“I’m sorry but there are no more positions available,” the general manager told me.

“There has to be something I could do,” I pleaded.

It was at that moment, that my friend, Rich, who worked in marketing, interjected, “What about Barney?”

They both looked at me with mischievous smiles on their faces.  It was as if the trap had been set and I had found my way directly into their 6-foot purple snare. Desperate, I agreed to take the position, one I was assured was a “piece of cake.” For future reference, anytime anyone describes something as a “piece of cake,” be leery because they are most likely lying to you.

Wearing the costume was extremely uncomfortable and smelled as if hundreds before me had spent many hours sweating in it, which of course, they had. It was a massive costume made up of two parts-a big furry body and a huge dinosaur head.  The nostrils in the dinosaur’s snout were the only openings and provided an obstructed view of my surroundings.  For this reason, I had a young girl accompany me around the fair.  She guided me as best she could around people, over the many wires of food trucks and carnival rides, and stopped me frequently to meet and greet my many fans.  Kids and adults of all ages hugged, kissed, and high-fived me throughout the night.

In the summer heat, it was not long before I was overheated and begging to get out of the costume. But I had a schedule to follow and was not allowed to end my shift until 8 p.m. each night. Another rule was that I could not talk nor could I remove any part of the costume in the presence of fans. My favorite part of each night was when I finally made it into the building’s concourse, waved at my adoring young fans through the glass windows one last time, and entered the privacy of the elevator that would take me back to my office.  Once inside the elevator, the massive head came off and I could see and breathe once again!!

On the last night of my stint as the big purple guy, there was a concert going on inside the Coliseum. Thousands of Lynyrd Skyryrd fans had packed the Coliseum to see the great Southern hard-rock band play.  As in the nights before this night, I happily made my way with my escort’s help to the door leading into the Coliseum’s concourse at 8:00 p.m. sharp.  My young fans followed me and pressed their faces against the glass, calling, “Barney!! Bye Barney,” waving as they sadly watched me head toward the elevator.

It was at this precise moment that the opening band for Lynyrd Skynard had finished their set and masses of fans spilled into the concourse for MORE refreshments.  I say more, because it soon became clear that these fans had already partaken in MANY alcoholic refreshments prior to this time.  Soon the young voices sadly saying “Bye Barney” were drowned out by the deep voices of many men shouting loudly, “Barney…hey Barney!”  Within seconds, I smelled the stench of beer. Through the nostril holes, I could make out the burly, tattooed forearms of these men as they surrounded me and began to jostle me back and forth like a human, or rather prehistoric, ping-pong ball.

Soon, the screams from the children outside were heard as they looked on with horror as their precious Barney was being attacked. The situation was becoming more frightening as the seconds passed and I lost sight of my escort.  I was about to take my head off and scream, “I’m not Barney!  There’s a girl in here that you are attacking!!” but I didn’t want to traumatize the young fans any more than they already had been.  I pushed with all my might to get through the crowd but each time I did, I was pushed back again.  Luckily, a security guard showed up and got me safely to the elevator.

Once inside, I ripped off the dinosaur head and tried desperately to calm myself.  My face was bright red, flushed from heat, fear, and anger as I tried to make sense of what had just happened. The security guard that rescued me helped me remove the rest of the costume and gave me some water to drink. Once it was clear that I was okay, we broke out into a fit of laughter that lasted the rest of the evening. 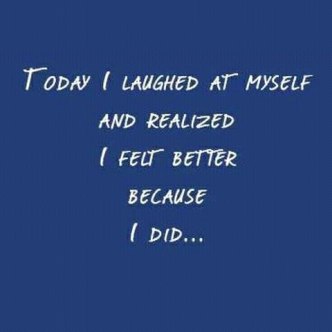 That security guard wound up becoming one of my closest friends and we spent many a night reminiscing about the embarrassing (and frightening) moment when I was attacked by Lynyrd Skynyrd fans while wearing a Barney costume. It was our story…one that bound our friendship. Because I could laugh about it (or rather because I survived TO laugh about it), I was able to turn a negative event into a positive one.

So, when you find yourself in an embarrassing or awkward situation, one that you think you may never recover from…remember my story.  As the saying goes, you may not be able to control what happens to you, but you can control how you deal with it.  In most cases, your best option is to just laugh out loud and with luck, you may be blessed with someone wonderful to laugh along with you!

Find yourself in a book. My book recommendation

Richard Bach’s work has had a great influence on me starting with one his most famous books, Jonathan Livingston Seagull.  This book is my recommendation for this first post.  It is a book small in size but so enormous in meaning.  Live your life as you see fit.  You don’t have to follow the pack and only do what is expected of you but rather you should push your limits and learn what you are capable of doing…even when others do not believe in your potential.